Formed out of the ashes of Children on Stun, a band well-known for its ability to knock senseless, bewilder and shock and truly one of the finest underground acts of the 90's, guitarist and songwriter Simon Manning made it back to the music scene with his new project Spares. He gathered a few familiar faces around him - Neil Ash, Nick Blewitt, Alison Wheatley to name a few - and recorded something quite spectacular for the debut album "Tired and Bizarre". It broke boundaries in more than one way and showed a variety in his song writing that we hadn't seen before. Immediately after the split of Children on Stun a record deal was set up between Simon and M&A Music Art, who had already released most of Stun's records.

The debut album was accompanied by the EP "The End of the Line" - a dance floor crasher. Two more Spares album followed, "Download" in 2003 and a year later "Suffering Fools Gladly", as well as a successfull Whitby Gothic Week-end head-lining. Starting out originally as a solo project Spares quickly evolved. It changed from a solo project with guest artists into a proper band doing live gigs and became much more than a showcase for Simon's talent and his will to discover and conquer new territories of the alternative music scene.

Although Spares never reached the heights or fame of COS they released three albums and one EP, each unique in its own way and very much the result of Simon's creativity and zest for music and life. In July 2015 sadly Simon M passed away.Simon M 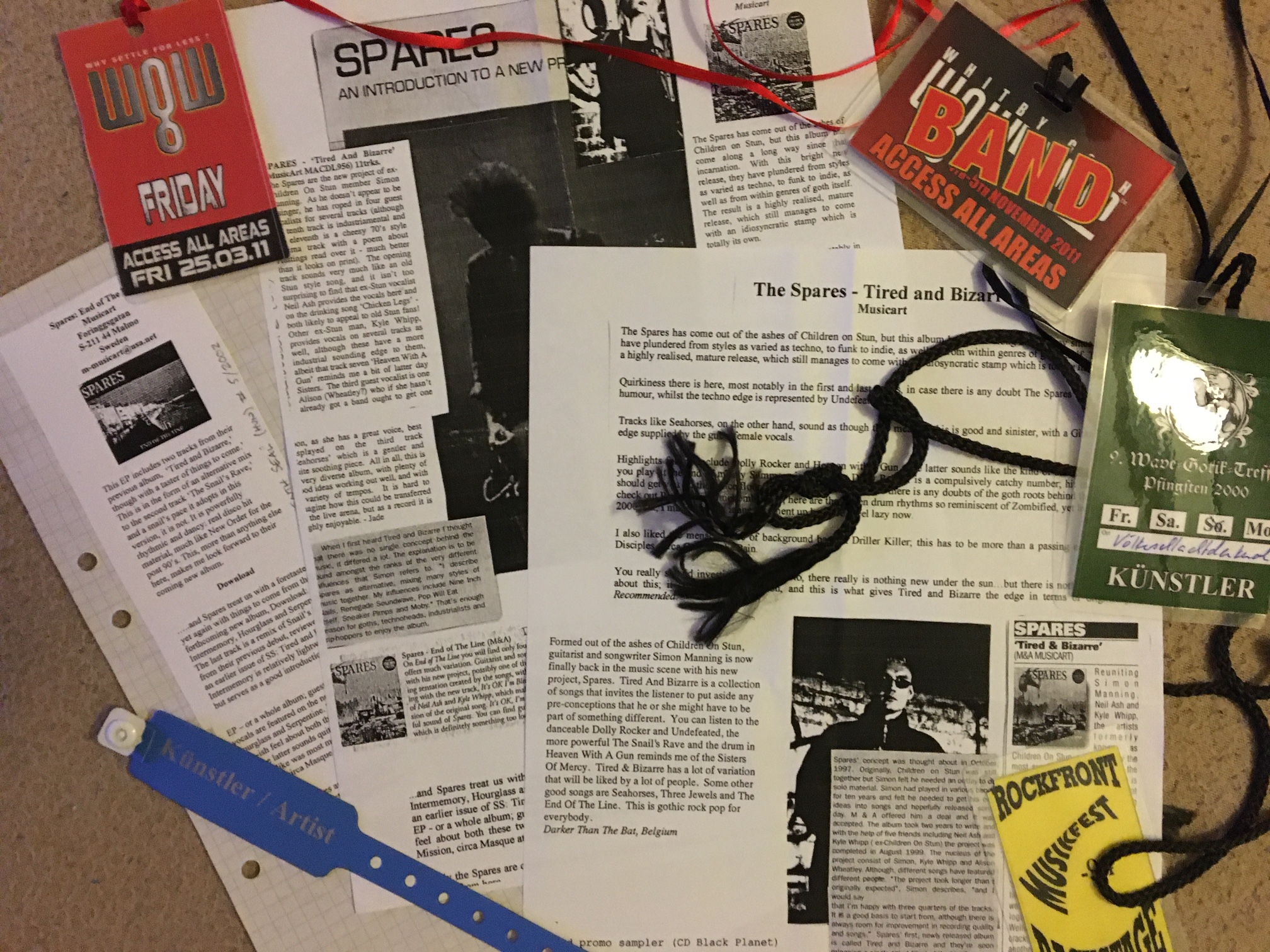 Formed out of the ashes of Children on Stun, guitarist and songwriter Simon M is now finally back in the music scene with his new project, Spares. "Tired and Bizarre" is a collection of songs that invites the listener to put aside any pre-conceptions that he or she might have and be part of something different. You can listen to the danceable “Dolly Rocker” and “Undefeated”, the morepowerful “The Snail’s Rave” and the drum in “Heaven with a Gun” reminds me of TheSisters of Mercy. “Tired and Bizarre” has a lot of variation and will be likedby a lot of people. Some other good songs are “Seahorses”, “Three Jewels” and “The End of the Line”. This is gothic rock pop for everybody.
(Darker than the Bat, Belgium)

Spares are the new project of ex-Children on Stun member Simon M. As he doesn’t appear to be a singer, he has roped in four guest vocalists for several tracks (although the tenth track is industriamental and the eleventh is a cheesy 70’s style cinematrack with a poem about Hastings read over it – much better than it looks on print). The opening track sounds very much like an old Stun style song, and it isn’t too surprising to find that ex-Stun vocalist Neil Ash provides the vocals here and on the drinking song “Chicken Legs” – both likely to appeal to old Stun fans! Other ex-Stun man, Kyle Whipp, provides vocals on several tracks as well, although these have a more industrial sounding edge to them, albeit that track seven “Heaven with a Gun” reminds me of a latter day Sisters. The third guest vocalist is one Alison (Wheatley?) who if she hasn’t already got a band ought to get one soon, as she has a great voice, best displayed on the third track “Seahorses” which is a gentler and quite soothing piece. All in all, this is a very diverse album, with plenty of good ideas working out well, and with a variety of tempos. It is hard to imagine how this could be transferred to the live arena, but as a record it is highly enjoyable.
Jade (Kaleidoscope, UK, #8/2000)

This EP includes two tracks from their previous album, “Tired and Bizarre”, though with a taster of things to come. This is in the form of an alternative mix to the second track “The Snail’s Rave” and a snail’s pace it adopts in this version, it is not. It is powerfully rhythmic and dancy: real disco hit material, much like New Order for the post 90’s. This, more than anything else here, makes me look forward to their coming new album.
(The Seventh Seal, Hun, #5/2002) On “End ofthe Line” you will find only four tracks and only two songs (each with twoversions) and still this CD offers much variation. Guitarist and songwriterSimon M (Children on Stun) is back in the music scene with his new project,possibly one of the finest underground acts of the nineties. This EP focuses onthe floating sensation created by the songs, with “The Snail’s Rave”, takenfrom the album “Tired and Bizarre”, blending with the new track “It’s OK I’m only Bleeding”. The remix of “The Snail’s Rave” is done by Stripper, the new band of Neil Ash and Kyle Whipp, which makes the Children on Stun connection even more valid. It is an upbeat version of the original song. “It’s OK I’m only Bleeding” is the first song and greatly introduces you to the wonderful sounds of Spares. You can find guitar rocking music to more EBM oriented sounds on “End of the Line”, which is definitely something to look out for as well as the forthcoming full length album.
(Darklife, UK, #VI/2001) … and Spares treat us with a foretaste yet again of things to come from their forthcoming new album, “Download”: “Intermemory”, “Hourglass” and “Serpentine”.The last track is a remix of Snail’s Rave, from their previous debut, “Tired and Bizarre”, reviewed in an earlier issue of The Seventh Seal. “Intermemory” is relatively lightweight, but serves good as an introduction to the album. Guest female vocals are featured on the next tracks, “Hourglass” and “Serpentine”. There is a 60’s-ish feel about these two tracks and the latter sounds quite psychedelic. A little like the most memorable of The Mission, circa “Masque” at the best moments. Clearly Spares are continuing in their more eclectic direction, so it will be interesting to see how things continue to develop from here.
(The Seventh Seal, Hun, #5/2002)

There is no direct mode of communication to the band members, but you are always welcome to contact the record label:
M&A Music Art